The Pandemic- Nailed It! 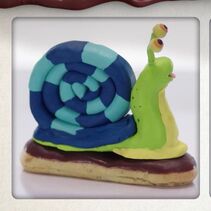 Even socially distanced, the Biddinger Lab likes to hang out together and to eat.
So,  we got together on Zoom and played our own version of Nailed It!  Joanna won the award for technical perfection, Ivana for beautiful work, Stu for innovation.  Sudha got a participation trophy.

Ivana Got Her Grant 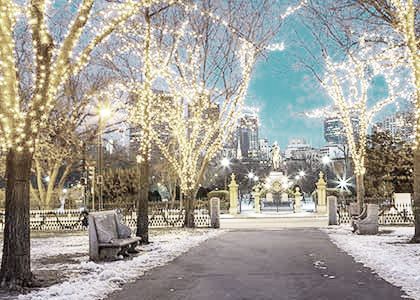 What:  Holiday dinner in the Back Bay
Who was there:  Xi, Sifan, Ivana, Courtney, Sudha...and Mary Haas!
Topics discussed:  The Broad Retreat, Diabetes, Politics, and why Sudha will never be the next Emily Post

This is Courtney.  Really.

Now it's a precendent

Even better than fun and games... 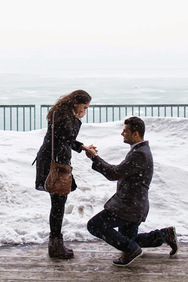 ﻿Who and what:  Abhi, being proposed to by Sahil
Who and what it's not:  The rest of the lab, or anything to do with lab
Why it's here anyway:  Isn't this the most amazing, romantic picture ever?
And what's even cooler:  We know them!
And probably should mention:  She said yes.
﻿ 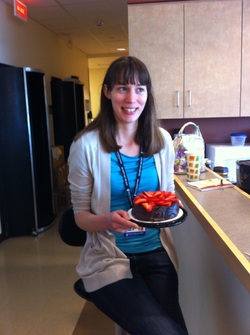 What:  Cake and ice cream
When:  May 15, 2014 (No, not on her actual birthday, which was the weekend before.  By doing it later, we added the element of surprise...and got cake on Thursday).
Who "baked" it:  Mary G.  Check out the strawberries!
Why we are so civilized:  we used paper plates and napkins. 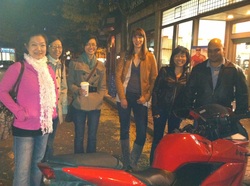 Where:  Szechuan Gardens
When:  Don't remember
Great thing about the lab:  Ji can order off the secret menu that's in Chinese.
And is that Praveen's motorcycle?  Yes, yes it is. 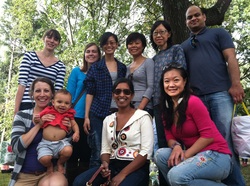 Where:  Honeypot Orchards
The Bad News:  The apples were not very tasty
The Good News:  Donuts were very tasty
The one with the most adorable belly:  Dante...cleary Dante. 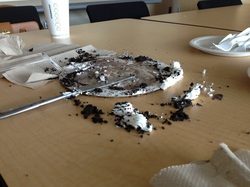 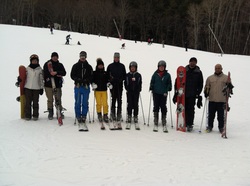 When:  December 9, 2012
What:  Holiday party and skating at Lars Anderson
So cool:  Everybody got on the ice. Dong-Ju and Mary G. both learned to skate for the first time!
So surprising:  Praveen can really wear a green scarf.

When: Halloween 2012
Who:  Superwoman (Sudha), Hulk (Alisha), Flash (Ji), Incredible (Mary), Spiderwoman (Dong-Ju), and the Green Hornet ? (what exactly were you Praveen?)
Why:  There should be a day when we get to dress like the superheros we really are

When:  October 26, 2012
Who:  Everyone
Why Sudha Loves The Lab:  Alisha made me my favorite cake --yellow with chocolate frosting! Note the very fancy lettering!
Bottom Line:  Life is Good

Unleashing the Artist Within 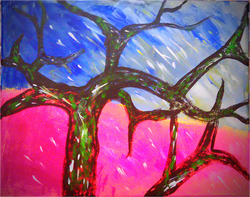 When:  July 1, 2012
Who:  Ji and Alisha
Why:  Let's just say that Groupons can be dangerous
Comments:  OK, maybe I didn't do so well in Art Appreciation, but isn't Ji's painting awesome? 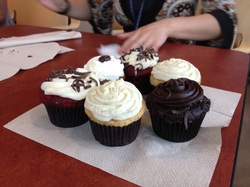 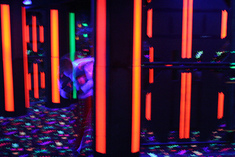 When:  March 31, 2012
Where: Laser Craze (Woburn, MA)
Why:  Because we could.
The free bonus:  A tour of Willmington.
Easiest way to freak out Alisha:  Drive through a small town.
Reason Praveen is the man:  Scored 80, 000 points, putting the Biddinger Lab in a solid first place over Jake's birthday.

What:  Celebration dinner
When:  March 19, 2012
Where:  Taranta's
Why:  Everything...papers, PQE, Praveen's Birthday, Alisha joining the lab.
Who was late:  Sudha.  Never underestimate parking in Boston.
Who didn't have a cell phone:  Everyone.

What:  Dinner and Drinks
When:  November 18, 2011
Where:  La Verdad
What we learned:  Mary has no pokerface.
What's in the picture:  Ji earning her title as Champion Arm Wrestler. 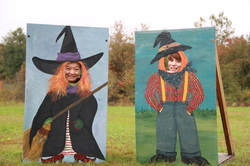 What:  Apple Picking
When:  October 2, 2011
Where:  Westward Orchards (Harvard, MA)
Who's in the picture:  Ji and Mary.
Summary:  The cider donut is a good thing.